I’d like to share this interesting case to highlight a few techniques for removing large polyps endoscopically. This patient was found to have a large polyp several months ago at an outside facility, with an unclear plan for follow up. He presented with an unrelated issue to one of our hospitals, and was found to be anemic and had guaiac positive stool. On colonoscopy, this large polyp was found in the ascending colon:

The fancy term for this large polyp is “granular-type lateral spreading tumor.” It is my opinion that most things containing the word “tumor” should be removed from the human body when possible. So how are we going to do it?

As you probably guessed, endoscopic mucosal resection is the simplest and safest way to remove a big polyp like this one. As always, we carefully inspect the borders of the lesion, and also look at the lesion itself to see if there are any signs of advanced cancer that would preclude endoscopic resection. Then we start with submucosal injection of a large volume of fluid to lift the lesion (in this case I used saline with methylene blue). 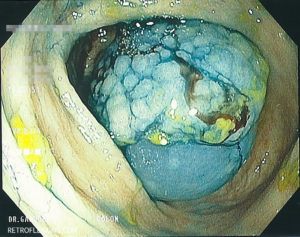 After lifting the distal edge of the lesion

Starting at the distal edge of the lesion (the part closest to the tip of the scope), injection and resection with a stiff snare is performed repeatedly in a piecemeal fashion until most of the polyp is removed. What was difficult about this lesion was not really the size, but the fact that the proximal-most part of the polyp (about 15% of the entire lesion) was difficult to lift and became impossible to capture using various snares in the forward-viewing position. The snare would just slide off, no matter how well I thought I had grabbed the lesion.

Sometimes repositioning the lesion is what it takes to get it done. A better angle between the snare and the polyp can be the difference between sliding over the top or capturing the lesion. In this case, retroflexing the scope in the ascending colon was the key maneuver needed to get the rest of the polyp out.

Now that the remaining polyp can be approached at a better angle, it is reinjected and then removed with the snare. Some of the edges are then “touched up” with hot biopsy avulsion. While still retroflexed, a few clips are placed to approximate the edges of the part we just resected, as this is the deepest part of the resection.

After resection: (L) Polyp base; (R) After 3 clips applied in retroflexion. A total of 8 clips were used to close this defect.

Finally, after placing a tattoo, the pieces of polyp that we just took off are collected for pathology, and we are done!

So in summary, here are a few tips when removing large polyps like this one:

Pathology revealed a tubulovilous adenoma with a focus of intramucosal adenocarcinoma. This patient will need a follow up colonoscopy in 3 months to assess the site.