After removing a large polyp endoscopically, it is recommended to follow up the site about 3-6 months later to make sure the entire lesion was removed and prove there is no further adenomatous tissue to resect. Often there is still a small amount of remaining tissue at the site, either from the edges of the polyp, or from tiny “islands” of adenomatous tissue from the base of the lesion, in between the snare polypectomy sites. Either way, residual adenomatous tissue is usually easy to deal with on the follow-up colonoscopy, and can be removed just like any other polyp.

Sometimes there is a little bit of abnormal-appearing tissue at the polypectomy scar that is not adenomatous. Rather this is granulation tissue (scar tissue) that results from the healing process, and is non-neoplastic. This can often be determined visually, but should also be biopsied to confirm that it is a benign process and not missed polyp tissue.

The following picture shows a large polyp that was removed endoscopically. You might remember the picture from this article. This patient was then rescoped 6 months later to re-examine the site: 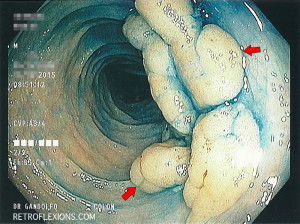 The original polyp, prior to removal. Red arrows show the edges of the lesion.

As you may have noticed, there is a tiny “nubbin” of tissue found at the center of the otherwise clean polypectomy scar. This was removed with biopsy forceps and turned out to be benign granulation tissue, indicating that the initial resection was complete. This is not always the case however, and as many as 31% of these large polyp sites can have residual polyp detected on follow-up colonoscopy, so make sure to do that colonoscopy in 3-6 months to check!

The quality of your experience matters more than the years.