Retroflexion in the right colon: Why to do it. 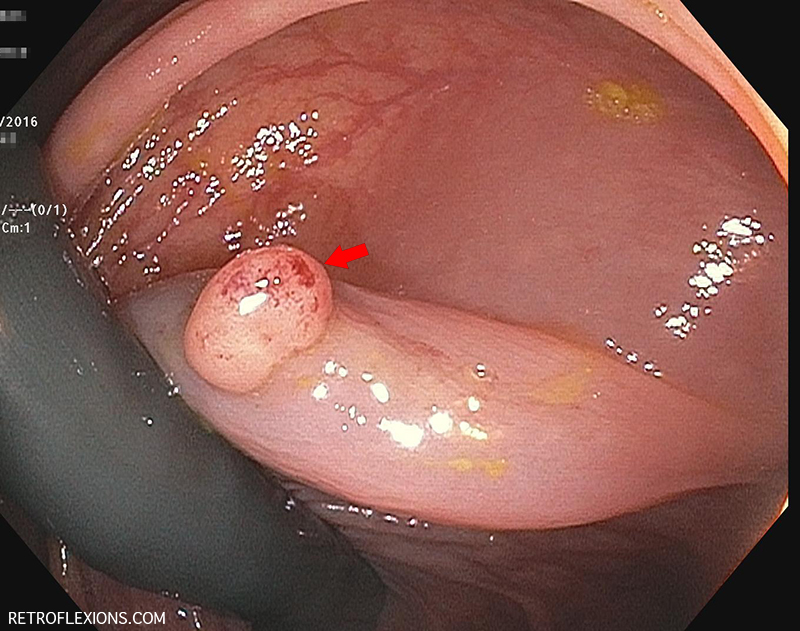 In the last article, we covered how to retroflex the scope in the right colon. In this article, I will show you why someone would want to do such a thing. Let’s take this one step further: Should we do this routinely during every colonoscopy?

Simply put, sometimes the only way to physically get to whatever it is you need to reach, is to retroflex the scope in the right colon. Usually this is done to resect a polyp in a difficult location, such as the proximal (back) edge of a fold. In a previous article, I showed an example of using retroflexion in the right colon to remove the remaining pieces of a large polyp. The following is an example from a more recent case:  I was able to see this polyp in the regular straight view, but due to the location of the polyp on a fold, I could not see the entire thing. The first thing I tried was injecting some saline behind the polyp to try and lift it forward towards the scope. Well, the lesion lifted well, but still was really hard to see and proved impossible to get the snare around. Retroflexing in the ascending colon solved that problem easily:

Retroflexed view in the ascending colon: Red arrow shows a polyp behind a fold. The lesion was injected with saline (prior to taking this picture), and then removed with a hot snare.

You may also have to retroflex to treat bleeding, such as a bleeding angiodysplasia, or a bleeding polypectomy site. Sometimes a polyp that was easy to see is removed and the site retracts behind a fold and becomes almost impossible to see. If that site bleeds a few days later, retroflexion to get in a better position to place clips straight onto the site may be the best way to treat it.

Should retroflexion in the right colon become a routine part of screening colonoscopy? Let’s frame this question with the following facts: Colonoscopy is less-protective against right-sided cancers (which implies that colonoscopy is less-effective at finding or removing right-sided polyps.) Polyp detection in the right colon is more difficult for several reasons (flat lesions, prep quality). Another one of these reasons is that polyps may easily hide behind folds and be impossible to see in forward-view.

To combat the risk of right-sided colon cancers, some authors have advocated a routine second-examination of the right colon during screening colonoscopy. A routine second-exam from the hepatic flexure to the cecum (in regular forward view) has been shown to yield an additional adenoma about 10% of the time. To me, this is a big deal, and means that by not looking twice at the proximal colon, we are missing small polyps in 1 out of 10 patients. As it turns out, there is a statistically similar increase in polyp detection if the second exam is done in retroflexed view.

The following reference is an excellent practical read on the topic, and is free to download on the AJG website:

Retroflexion in the right colon: How to do it.

Are you a “pill person”?