How exactly does alcohol cause liver problems?

Alcohol has been enjoyed by people throughout the world from the beginning of recorded history up until present day. It is an important part of many cultures and social gatherings, but because alcohol is available almost everywhere it is also easily misused and abused. By now, it is pretty much common knowledge that drinking a lot of alcohol is not really great for your liver. But how does alcohol actually cause liver damage?

To understand how alcohol causes damage, we need to understand what happens in the body when alcohol is ingested. After alcohol is consumed it is absorbed by the stomach and small intestine and delivered to the liver through the portal vein. The liver now has to deal with the alcohol by metabolizing it into something less toxic for the body.

The liver detoxifies alcohol in two main ways: First, there is an enzyme called alcohol dehydrogenase which is present in the liver cells with the main job of breaking down alcohol into something called acetaldehyde. The only problem is that acetaldehyde is kind of toxic too, and can cause damage to the normal proteins in the liver. If too much acetaldehyde forms, one can experience flushing, nausea, vomiting, palpitations…hopefully this doesn’t sound too familiar! Acetaldehyde is then broken down by an enzyme called aldehyde dehydrogenase to a substance called acetate, which is released from the liver cells and can be turned into energy by the heart and muscles. 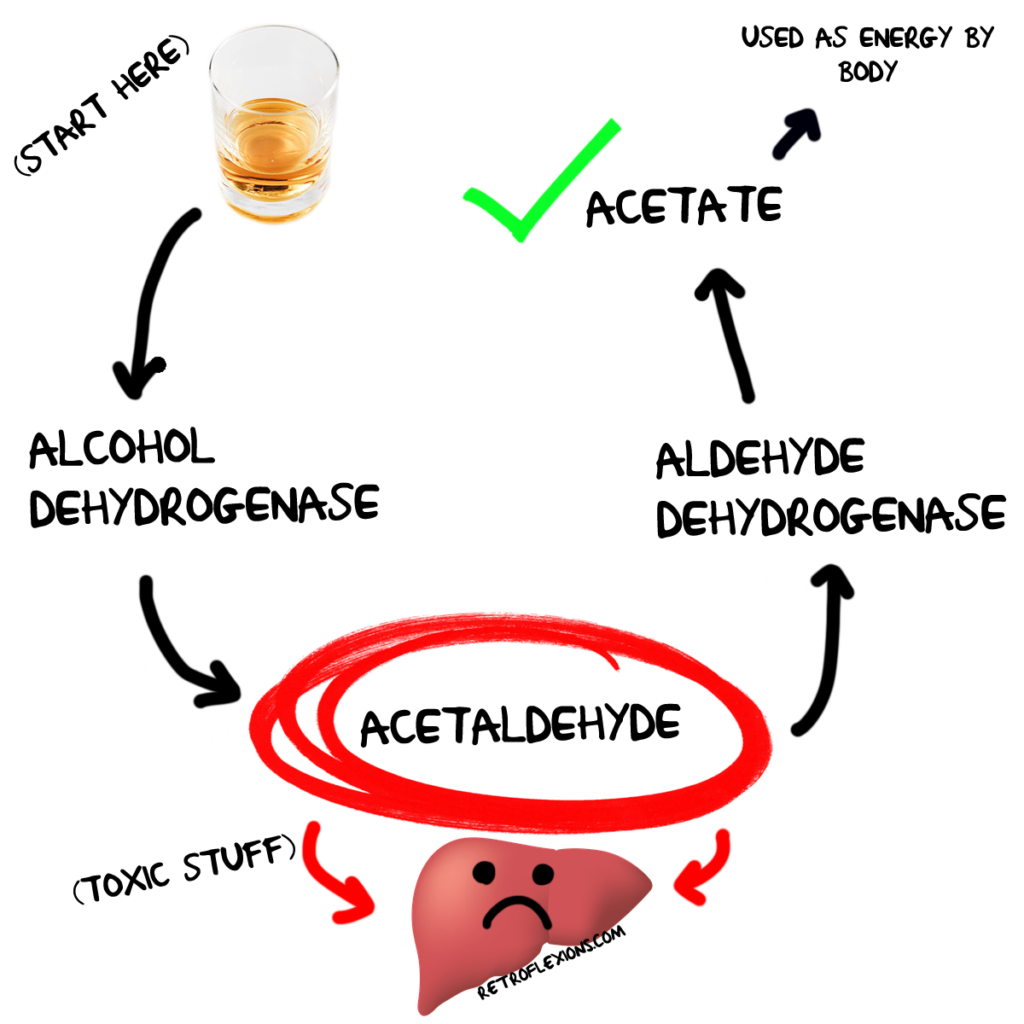 Alcohol is also broken down by a family of liver enzymes (called cytochrome P450 enzymes) which also convert alcohol to acetaldehyde. However, not only is acetaldehyde toxic in its own right, but the cytochrome P450 enzyme system also causes the formation of nasty reactive oxygen species as a byproduct. (Reactive oxygen species are also called “free radicals” and are unstable molecules that cause damage by oxidizing critical proteins and other materials in cells. Think of pouring hydrogen peroxide on an open wound…that is what free radical damage looks like, only on a smaller cellular level.

This is a huge oversimplification and there are many other ways that alcohol a) gets metabolized, and b) causes liver damage. However, since this is not a textbook we will move on to the fun stuff next.

Alcoholic liver disease (ALD) is the general term used for liver problems related to excess alcohol ingestion. There is a spectrum of liver disease seen with alcohol use, which usually occurs in a continuum from mild and reversible, to severe and irreversible.

The first manifestation of ALD is alcoholic fatty liver. The alcohol-induced inflammation described above alters metabolism of triglycerides and fatty acids in the liver favoring accumulation of these substances in the liver cells. The liver becomes swollen and inflamed, leading to the leakage of liver enzymes into the blood. Blood tests may show high levels of these liver enzymes (called AST and ALT). Ultimately, fatty liver is reversible once excess drinking is stopped.

However, if the patient with alcoholic fatty liver continues to drink, one of two things will usually happen depending on the patient’s sex, genetic predispositions, nutritional state, the time course of the drinking, the sheer amount of alcohol consumed, and many other factors: Alcoholic hepatitis or alcoholic cirrhosis.

Most patients who survive the experience of alcoholic hepatitis eventually find out that underneath all that liver inflammation is cirrhosis. Cirrhosis is when the liver becomes fibrotic (filled with scar tissue) and functions poorly, causing a host of problems. Cirrhosis also can occur slowly and quietly without having to progress through alcoholic hepatitis; this is often seen in the “heavy social drinker” who never really drinks that much in any one sitting. However, over the course of a week or so, the heavy social drinker consumes quite a bit of alcohol and as we know, weeks lead to months, which lead to years. Just like interest in a retirement account, the slow progressive damage adds-up over the years of “social drinking” and causes cirrhosis just the same as if the person binge-drank their way there in only a few years of heavy alcoholism. At least when someone drinks with fury the liver damage is expected: The slow silent damage is more insidious since there are no great ways to tell that liver damage is happening until the damage is done. In fact, liver function blood tests may be normal despite the presence of cirrhosis. 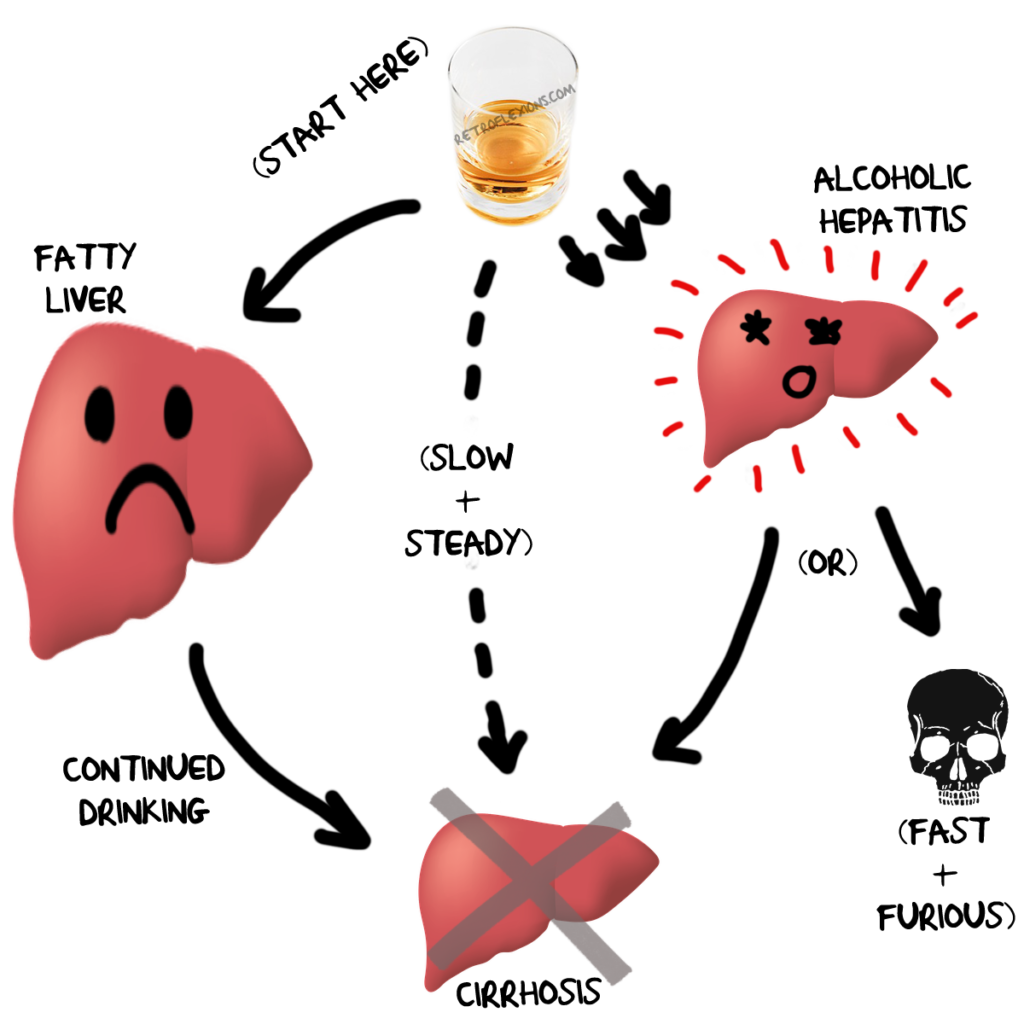 There is an old adage that states “The dose makes the poison.” That is, anything can be a poison in sufficient quantity (think water, potassium, or oxygen for example), and if you take a real poison like cyanide and dilute it down so it’s barely detectable than it ceases to cause damage. In that same vein, alcohol is basically poison that people ingest willingly for pleasure, but just how much alcohol does it take to poison your liver? How many drinks separate safe social drinking from “heavy” social drinking, from a full blown bender? Well, that is an excellent topic for a future post, so stay tuned!

Probiotics vs. Prebiotics: What are they and why should you eat them?